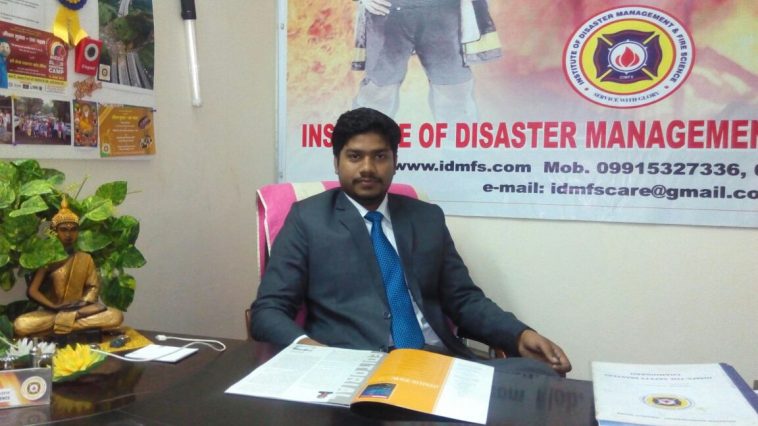 Mr Ankur Kumar, ManagingDirector, Institute of Disaster Management & Fire Science (IDMFS), is now India’s one of the leading disaster management service providers. And his journey is as brave as his work. He has always been that person who pushes himself harder than anything else. After the completion of his studies, he wanted to do something bigger for the safety & disaster management services of the country, he wanted to be a better version of himself. Hence, he started IDMFS on that purpose.

According to him, “safety management is always changing and taking new heights for avoiding the incidents/accidents by developing a new safe system of work. Thereby, it was strongly felt to share my knowledge in the areas of safety engineering and its management.” Thus, with strong desires to change the scenario of safety engineering & management, and also to change the viewpoint of people towards this service, as he described “KI FARK PAINDA HAI and converting it to BADA FARK PAINDA HAI”.

As there were many reasons for him to choose this profession, he rather prefers calling it for his passion. According to him, safety management services are being upgraded every single day with the help of science & technology to save humans & look after other circumstances, and he wanted to be a part of it. Also, now that the institution is providing good job opportunities to the employable Youth, having adequate academic qualifications, but was lagging behind because of non-professional qualifications, the motive has been accomplished. He then says, “I could emerge as successful because of The Inning Spirit, which drove me to be a successful entrepreneur.”

Although the initial years of his journey were not smooth. He had faced a struggle for finding cadets & getting them employed. But over the years, hard work, dedication has made this possible for him. He has immense faith in his organization and his cadets as well, as he believes they will be bringing in fruitful results. As his inspiration behind all of this, he mentioned his father, “Shri Yash Pal Chauhan who ventured the idea and proved it in reality.”

Mainly the lack of emergency and safety issues in India has triggered him hard enough to open this sector as early as possible in his life. And being it his passion made it even easier for him to follow this journey along. He truly is great at what he does and wants people to know about his journey and endeavours. This man has already won, “Asia Education Award-2016 as “Best Disaster Management Training Institute of North of India” conferred by Worldwide Achievers. Received “Excellence in India Education Award-2017” conferred by Katalyst Research.”