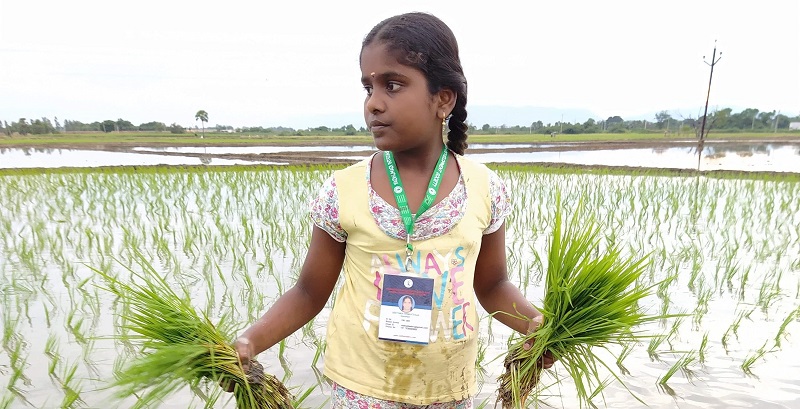 Geethika Venkatesan, 6th class studying, Activist/ Founder, the Founder of the NGO – Yadhumadi Integrated Rural and Urban Development Society, age ten years. She is a wonder kid. Her father tells us that after reading about Global Warming, she asked him why he doesn’t plant more trees or why numerous lands are vacant, or why there is a water shortage, surprising her father with maturity at such a young age. And, eventually, these thoughts stayed inside her and directed into something special. She started the NGO with just seven members, and now the NGO completed their maiden year.

Whether it is performing seminars, interacting with farmers, allocating food, planting trees, she has provided more to society than most people ever do in a lifetime. Balancing all the fieldwork with the school, she is a terrific student who excels in studies as well.

Not wasting a single minute, the 10-year-old girl has motivated many people through her actions and still doing the same. This kid is just full of surprise; she aspires to become an Astronaut, and driving inspiration from Kalpana Chawla. But in the midst of all of these, she promised always to keep working for the advancement of rural people.

Emphasizing the NGO on the slogan- ‘Bring Back Agriculture,’ the father explains to us why it is important for the agricultural sector to grow—referring to India’s huge population. He further describes how civic aspirations and dreams have clouded India’s most disregarded, yet the most populated sector, adding that even farmers want to get metropolitan jobs, giving an instance of civil construction work.

The NGO has flourished and inspired hundreds of farmers. Even during the COVID-19 pandemic, Geethika has distributed 15-20kgs of food to needy farmers and migrating people on a daily basis.

Although she has been applauded by many, the NGO is funded solely by Veeraswamy. The father elaborates on how wealth can come and go, but the change will be there forever, about how motivating the farmers is much more valuable than money. Whether buying seeds or fertilizers for farmers or organizing occasions, he has donated from his pocket even though he came from a low-income family himself. He realizes this is a small sacrifice in making his daughter’s dream a certainty.

He proceeded to state how social media is the best outlet for rethinking and innovations. This has provided him encouragement from people in various countries like America, Australia, Poland, and the Philippines. He refers to how an animal group activist from Australia motivated him. He feels positive and believes the youth in giving rise to significant change and intends to do the same. Thus, he wishes his daughter & her work will inspire many and the coming generations.