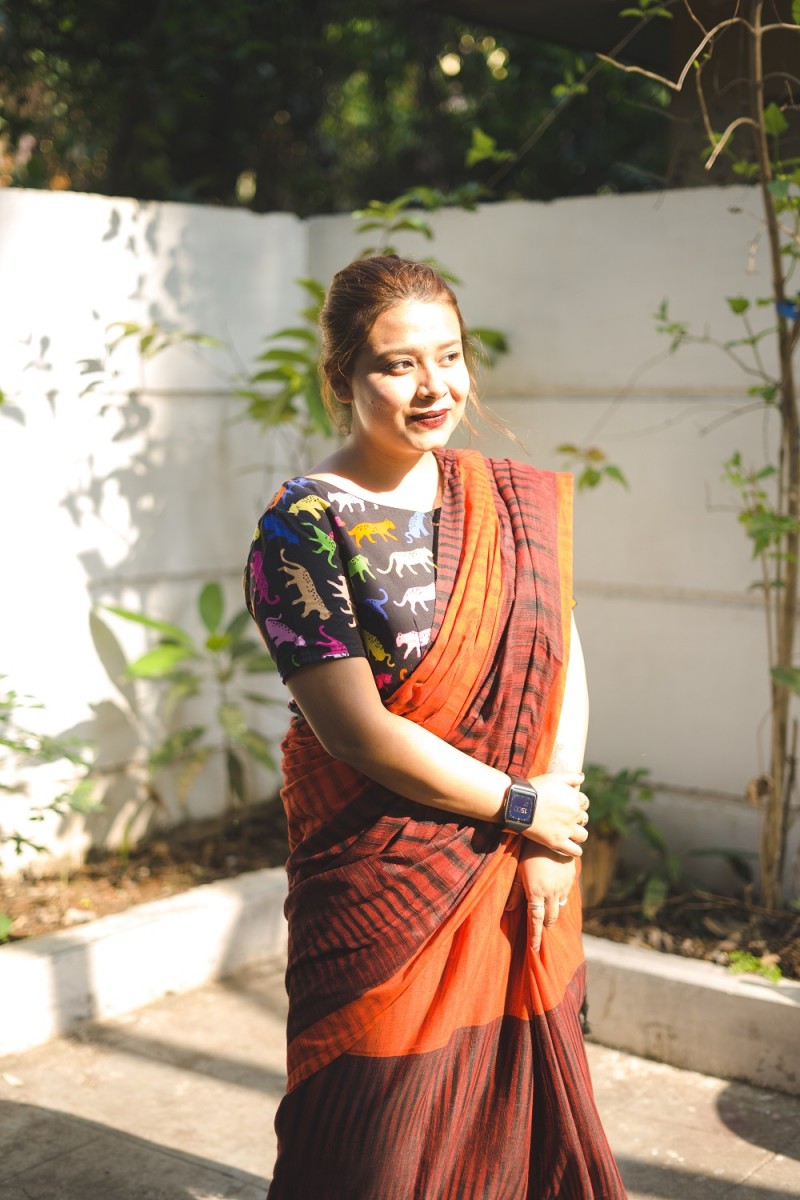 Some people consider fashion to be whatever is sensible, while others reserve the term exclusively for when the attire screams extravagance. Talk to anyone who has thought more deeply about it, and they will talk about how fashion is an important tool of representation of cultures and histories. D Jahnabi Suman is a daughter of the Brahmaputra, nurtured in the culturally fertile environment of Calcutta. Today she is a fashion designer that looks at fabrics as tools for storytelling and sources those fabrics from natural sources to exemplify the stories that she tells with the clothes she designs. She has named her label after herself and is called ‘Jahnabi.’

Motivated since her childhood to pursue some sort of craft-oriented creative endeavor because of the admiration she received from her peers and elders, she graduated as a fashion graduate from the JD Institute of Fashion Technology when she grew up. Following her own passion after college wasn’t an easy job, however, her family did not completely support the idea of her becoming a ‘tailor’ because they would look at the profession from their dated perspective.

Her sheer determination and perseverance, however, ensured that they eventually got around to the idea and are now completely supportive of her career and her aspirations. This passion is worth exploring in a conversation with her because the wondrous delight that she talks about it is wonderful to witness. She is a happy old spirit by heart, and she expresses that personality through her designs – the warm, surreal, and lively tones that she uses for her fabrics speak of a free-spirited sentiment, with a tinge of conservative retro naturalism.

Her target niche is mostly menswear, and that is not without reason. She frequently expresses her opinion that menswear really suffers from a dearth of lively and warm designer clothes for men that would look great. With this opinion, she exhibits her ability to grab the pulse in the market; she echoes the sentiment of a lot of disgruntled men who roam aisle after aisle of established clothes’ brand franchises skimming through standardized opaque designs. Her solutions are ingenious; she makes menswear out of natural fibers, which give clothes a comfortable and classy look. With her creativity, she has opened multiple unprecedented opportunities in the design of menswear.

As a designer, my work is to design fine clothes and come up with glamorous styling. But in this journey of design I have seen, there is a very less designer for men’s. So, I thought if I could also bridge the gap for menswear with my creativity and using textiles, which are organic and made of natural fibers — giving it a comfortable and classy look.

She has truly reinvigorated the space of the up and coming fashion industry where materials are all naturally sourced. She has employed her own history of belonging from culturally and naturally vibrant places, and let it reflect in her designs, and the world is all the better for everything that she has contributed to it.